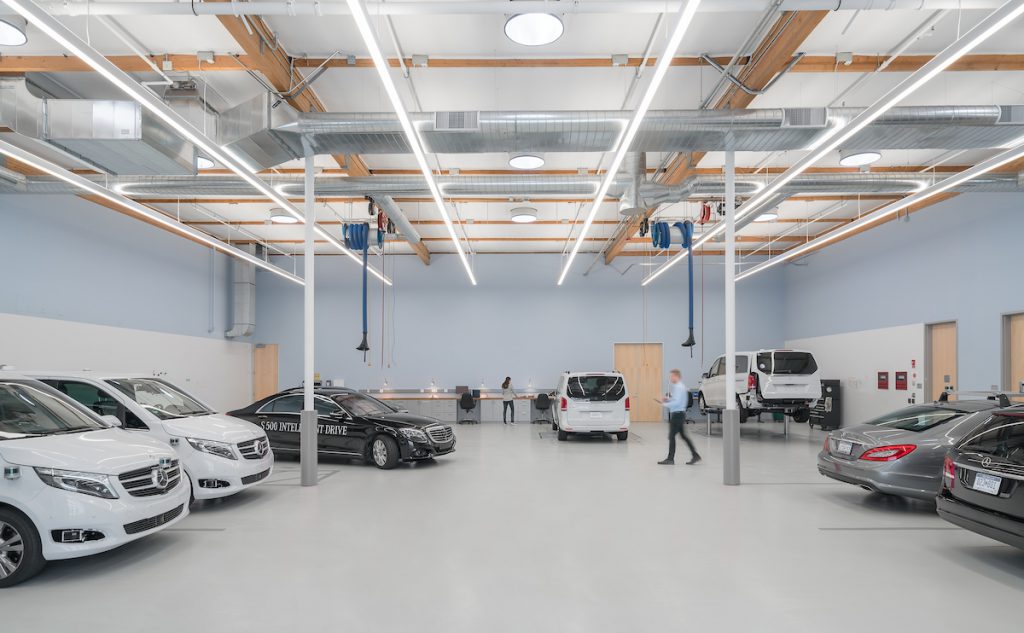 Originally posted by The Registry on October 2, 2017

With intense anticipation looming about when and how autonomous vehicle technology will hit the mass market, automakers are seizing opportunities to enhance their Silicon Valley footprints in preparation. Several companies including Mercedes-Benz, Ford, BMW and Bosch have been enhancing their real estate environments in an attempt to find their niche in the new world of self-driving vehicles as well as attract the best talent necessary to develop the technology for optimal safety and practicality. Mercedes-Benz recently completed an improved R&D office at 340 North Pastoria Avenue in Sunnyvale. The new space is right across the street from the Mercedes-Benz corporate campus and is geared to not only amp up autonomous vehicle development, but also attract new, often young, tech talent who expect fun, casual work environments, stocked with amenities and open-concept work areas. Hillhouse Commercial Construction was the general contractor working with CBRE, the construction manager. DGA designed the improvements to the building that’s owned by H&S Properties.

“Mercedes is a cutting edge company and autonomous vehicles is a cutting edge technology—that’s exactly what we want to get involved in,” said Steve Jackson, project manager, Hillhouse. “We finished in 2016; it was a fast-tracked project over a 13-week construction period. It’s a beautiful space, and we really enjoyed working on it.”

The original building was a light manufacturing, concrete tilt-up structure lacking many windows, and it didn’t convey well the Mercedes brand or evoke high-tech development. Today, it’s a completely different environment that’s well lit through both skylights and exterior walls to permeate the indoor space with an outdoor feel.

“It’s a huge space vertically—we built a mezzanine into it to increase the area of the building and give an isolated loft space for folks doing focused coding work,” explained Jim Kaylor, senior project designer, DGA. “A large open, expansive office area has a very flexible design where teams can move around easily. Adjacent to the office area is a tech-outfitted mechanics garage and electronics lab. There’s also an outdoor dining and work area.”

The “electronics lab meets mechanics garage” is a 6,500 square foot area for autonomous car development that’s carved into the overall 22,000 square foot project. It can handle about ten cars at a time and is equipped with ground concealed auto lifts and clean decor, possibly making it one of the sleekest auto shops in existence. Specialized acoustical treatments absorb any noise from machines, maintaining the sophisticated feel of the work environment.

Several conference rooms with large glass windows and doors punctuate the rest of the space as well as a kitchenette and break room featuring a pool table. The furniture throughout is colorful against a more serious metallic backdrop. Many of the rooms in the building are named after Australian places such the “Bondi Beach” dining area after the popular Sydney destination. The theme was chosen to be evocative of the R&D office’s “outpost” status next to the corporate campus, which also has rooms named after other continents.

BMW and Ford are also updating their respective Silicon Valley images. BMW is retaining its current showroom at 150 East El Camino Real in Mountain View but upgrading the design to that of a regional destination where people can experience the spirit of the company and learn about latest technologies. Ford Motor’s new CEO Jim Hackett was chosen in part to take up the cause of focusing on innovation that included autonomous vehicles. The company’s new 150,000 square foot Research and Innovation Center at 3200 Hillview Avenue in Palo Alto was built to attract the best talent to develop robotics for its autonomous vehicles.

Bosch, a research and technology company has been working on relocating from Palo Alto to a 104,000 square foot R&D office at 384 Santa Trinity Avenue in Sunnyvale. It will house offices and a broad range of R&D spaces including auto labs, battery, biochemical and electronics labs. The company already works closely with automotive companies, making parts for Tesla and Mercedes. The project has been designed and is currently in the permitting stage, with permits to be issued by the end of July and potential move-in by the end of 2017.

“Bosch has been growing its R&D operations for the last 25 years and it keeps growing,” commented Steve Polcyn, project manager at DesignLink who’s working on the project. “Bosch is much more than an automobile group. They’re heavily involved in the ‘internet of things’ and have been doing some amazing work including making batteries more efficient.”