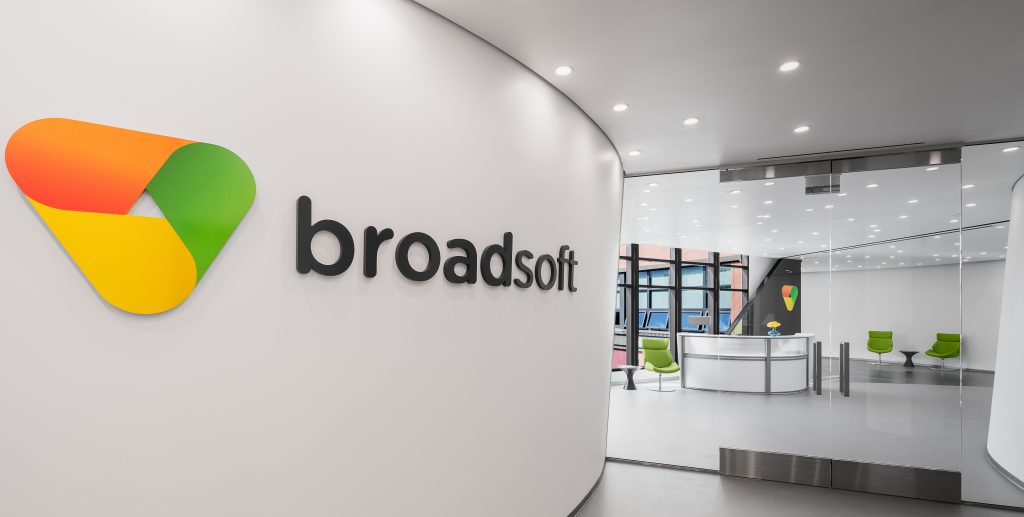 ORIGINALLY POSTED BY THE REGISTRY ON OCTOBER 23, 2017

With today’s announcement of acquiring BroadSoft, Cisco Systems is also gaining freshly updated offices that the technology firm opened in San Jose’s Santana Row just last month. Cisco’s foray into more software services is meant to help the company diversify its offerings from network routing and switching products. BroadSoft will help Cisco gain a foothold in the growing software market targeted to major cable and telecommunications networks, as well as a nifty spot in one of San Jose’s most desirable locations.

After unveiling a fresh, open concept corporate look at one of its offices in Virginia, tech firm BroadSoft has instituted a nationwide rollout of the glass-filled office concept, which included its office in Santana Row that opened last month.

Employees have been working out of the new space since September 18.

OUR PRODUCTS ARE FOCUSED ON ENHANCING COMMUNICATION WITHIN BUSINESSES AND HAVING COLLABORATION TOOLS. SO, WE THOUGHT IT WAS IMPORTANT FOR US TO LIVE WHAT WE SELL.

San Jose-based Hillhouse Construction Co. completed the 29,640-square-foot office improvement, which is located at 3055 Olin Ave. at Santana Row, in a third-floor location formerly occupied by Club One Fitness.

Tysons, Virginia-based Davis Carter Scott Design served as architects for the project. About 10 to 15 percent of the location’s interior area contains offices or conference rooms, while the exterior is devoted to open workstations. “We had to find a way to make that exciting and appealing,” said Rodrigo Udaeta, a designer with the firm, which is also designing similar office locations for BroadSoft in two other states.

The renovation has created an airy, open working space with an abundance of glass. 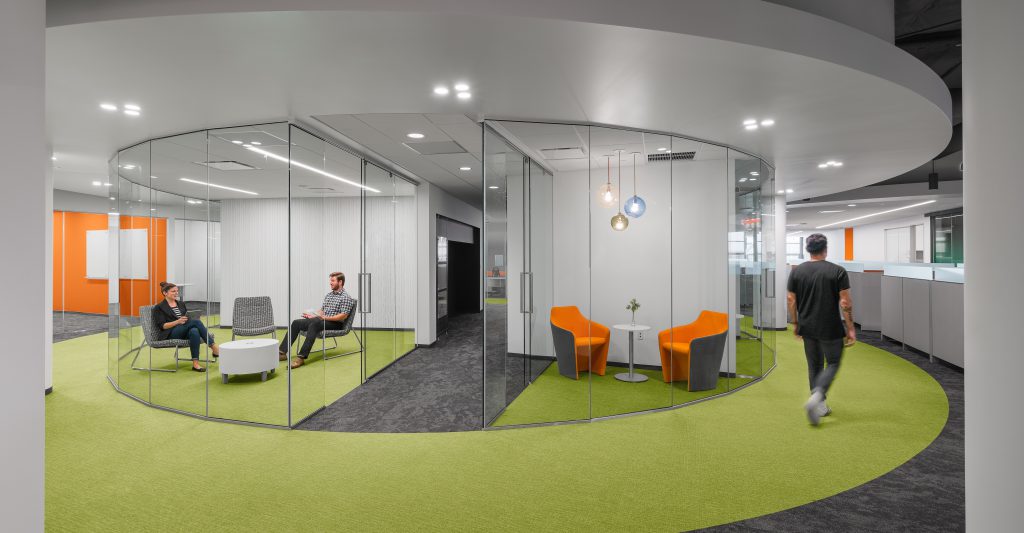 “We have a new look and feel this year,” said Mary Ellen Seravalli, who is the chief legal officer of BroadSoft and is also in charge of the company’s facilities. “We changed because we wanted to have much more open space and collaboration areas,” she said. “Our products are focused on enhancing communication within businesses and having collaboration tools. So, we thought it was important for us to live what we sell,” she said.

BroadSoft did not release how much the company spent on renovation cost.

There are three main conference rooms and “touch down areas,” or unassigned spots equipped with desks, chairs, power outlets and other work necessities where BroadSoft employees who are visiting from other locations can plug in.

The Santana Row site now serves as a unified location for two former BroadSoft locations, one located a few blocks from Santana Row in San Jose. The new office also absorbed the staff and operations of Transera, a Sunnyvale-based provider of cloud-based contact center software for small, medium and large enterprises that BroadSoft acquired in February 2016.

The Santana Row location now has 75 employees from the two locations, with room for a total of 135 workers down the road.

Construction on the office started in May and involved the demolition of the entire former health club space, said Jessica Reiswig, the project manager for Hillhouse. Renovations were completed in August of 2017, she said. One of the most distinctive parts of the new office is an S-shaped wall in the reception area, she said.

Installing that feature took perseverance, said Reiswig, who noted the crew had to work around various structural features that presented challenges, including existing steel beams and conduits. But the result, she said, is a look that’s “just subtle enough that it’s a cool element, it’s a little unexpected.”

There are also glass sliding doors to enclose meeting rooms of varying sizes to accommodate large and small groups, seating as few as two people or up to two dozen or more.

“When you’re working with an open concept, you have to be able to give people spaces that they can utilize in a way that they can still find privacy for meetings” without having to use a larger conference room, said Reiswig. “If two or four people need to have a quick chat about something or work out some details or write on the whiteboard and try to figure something out, you don’t need to book a 20-person conference room.”

Offices with similar features will be included in new BroadSoft locations that are being constructed in Tulsa, Oklahoma, and Plano, Texas. The Oklahoma office will open in early 2018, while the Texas office is on track to open in November.